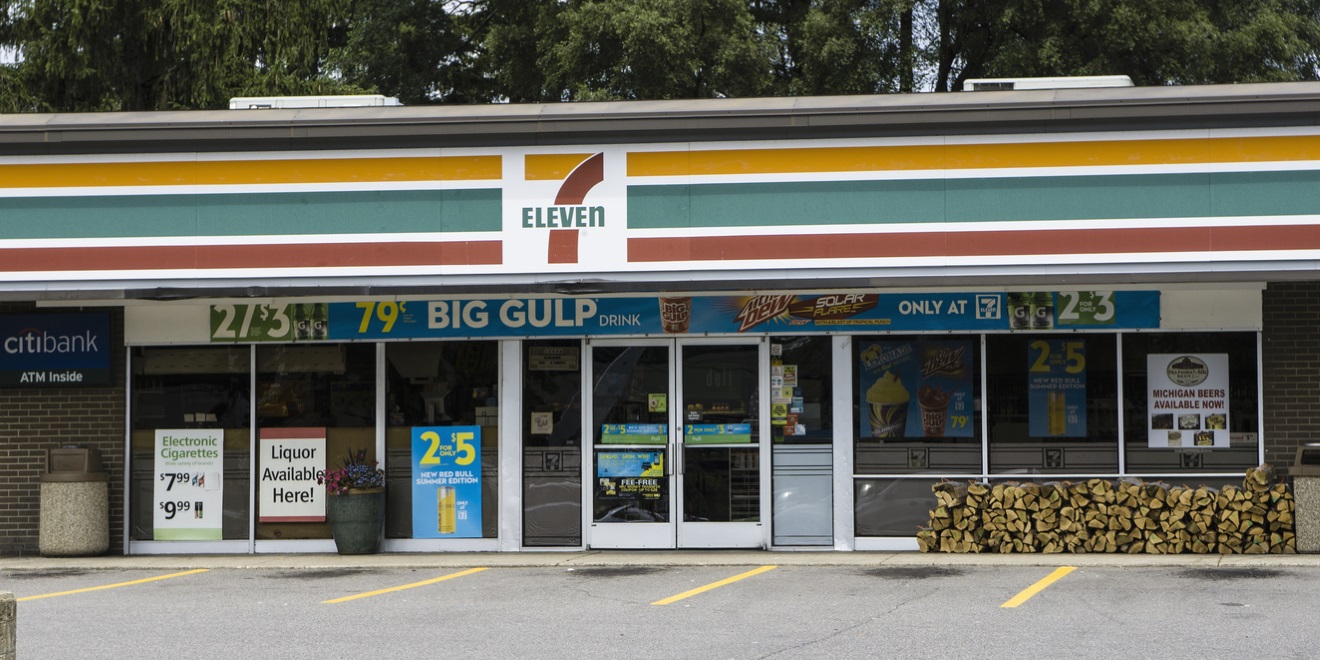 More often than not, franchised businesses specialise in a particular product or service. Whether that’s fast food, education, cleaning, pet services, kids’ entertainment or beauty treatments, most successful franchises have found a niche and taken full advantage of it. When it comes to the 7-Eleven store front retail franchises however, it’s not so much the products they sell but the way they sell them that’s been the key to the business’s success. By making their stores as convenient as possible, the brand has been able to build up a loyal following and has expanded its operations across thousands of locations around the world.

In fact, the brand now has an incredible 58,000 stores in 17 countries worldwide and provides drinks, snacks and other essential products to millions of people every year. As well as being one of the best-known franchises among customers, 7-Eleven also has a great reputation with investors. Regularly voted among the best franchises to work with, the company puts a huge amount of effort into supporting franchisees and helping every single investor to make their venture a success.

As the brand is so successful and so well known, it’s unsurprising that it attracts a lot of interest from potential investors. If you’re one of the many people currently considering taking on a 7-Eleven franchise, learning a little more about the brand and its history could help you to make your final decision. Keep reading to find out more.

The history of the 7-Eleven franchise

The 7-Eleven brand can trace its history back over 90 years to 1920s Texas. It was there that in 1927 Southland Ice Company employee John Jefferson Green began selling eggs, milk and bread from his storefront in Dallas. The theory behind this move was that, by selling everyday items in local convenience stores, customers wouldn’t have to travel long distances just for basic supplies. Eventually, John Jefferson Green bought the Southland Ice Company and turned it into the Southland Corporation. He soon opened several more locations in the Dallas area.

The locations – thought by many to be the first convenience stores in the world – were known as Tote’m stores as customers ‘toted’ away their packages. As well as being convenient for customers these early shops were very pleasant to use. This was down to the fact that Joe Thompson, a founding director of the Southland Ice Company, insisted that every customer receive the same high-quality service in every store they visited. To this end he developed a training programme specially designed to ensure employees provided a good level of service no matter which branch they operated from.

Although the brand was badly affected by the Great Depression and the Second World War, it managed to survive this difficult economic period and by the 1940s was still going strong. In 1946, the brand realised that its customers wanted even more convenience when it came to buying groceries and so extended its hours from 7am to 11pm. These long hours were unprecedented at a time when most shops kept normal business hours. The extended opening times caught customers’ attention and soon the convenience stores became known as 7-Elevens. Although today many 7-Eleven locations are open 24 hours a day, the name has stuck and the brand has become instantly recognisable in countries around the world.

The 7-Eleven franchise is born

Although 7-Eleven had worked to increase the number of locations it owned, the company still operated all the stores that bore its name. This changed in 1964 when 7-Eleven purchased the 126 Speedee Mart, which was a chain of franchised convenience stores in California. With this acquisition 7-Eleven joined the franchise business and the company has never looked back. In 1968, the company signed its first area licensing agreement with Garb-Ko, Inc of Saginaw, Michigan, making the company the first US 7-Eleven licensee.

Changing fortunes of the 7-Eleven franchise

In an effort to avoid a corporate takeover in the late 1980s, the Southland Corporation ran into serious financial difficulty. The brand was also badly hit by the stock market crash of 1987 and was forced to sell of hundreds of store locations and several arms of the business in order to pay off the debts it incurred fighting off the takeover. One of the major drawbacks of this sell-off was that many 7-Eleven locations were bought by rival convenience store companies. This diminished the reputation of the brand and gave its competitors a much-needed advantage.

In 1990, the heavily indebted Southland Corporation decided to file for Chapter 11 Bankruptcy. This was done in order to transfer control of 70% of the company to Japanese affiliate Ito-Yokado. Following a cash injection of $430 million from Ito-Yokado and 7-Eleven Japan, the Southland Corporation was able to exit bankruptcy in 1991.

The two Japanese companies now owned 70% of the business while the Thompson family retained 5% of the brand. In 1999, Ito-Yokado formed Seven &I Holdings Co and 7-Eleven became its subsidiary.

Future of the 7-Eleven franchise

Although it’s one of the oldest franchises on the block, 7-Eleven continues to dominate the convenience store market and its owners are constantly looking to expand the company’s reach. In 2016, the Japanese owners announced that they wanted to expand 7-Eleven to have 20,000 stores in the US alone. It hopes to do this by expanding its appeal to a wider audience and cementing its place as the most convenient of convenience stores.

This ambition shows that 7-Eleven is still very much a forward-thinking company and demonstrates just how many potential opportunities there are available for hard working franchisees. As well as increasing the number of its locations, 7-Eleven also wants to look at ways to boost average daily takings for its franchisees. The business aims to do this by offering products that are tailored for a local market and by ensuring that the quality of the products it sells is of the highest quality.

The benefits of investing in a 7-Eleven franchise

A lot of investors are attracted to the 7-Eleven brand as the company is continually voted one of the best franchises in the world. Providing an incredibly high level of support to its franchisees, it offers a turnkey option to those looking for a lucrative investment.

The total cost of investing in a 7-Eleven franchise can vary between $37,550 to $1,200,000. Potential franchisees will also need a net worth of $100,000 to $250,000 of which $50,000 to $150,000 must be liquid assets. For your money, you’ll receive a huge amount of support when selecting and acquiring your location, setting up your store and launching your venture. This support will continue throughout your relationship with the franchise and will help you to ensure your business is profitable as quickly as possible.

If you’d like to find out more about the many benefits offered by the franchise model, you’ll find lots of information on our site. Take a look around today to learn more about franchising and to find out about the different opportunities available in your local area.