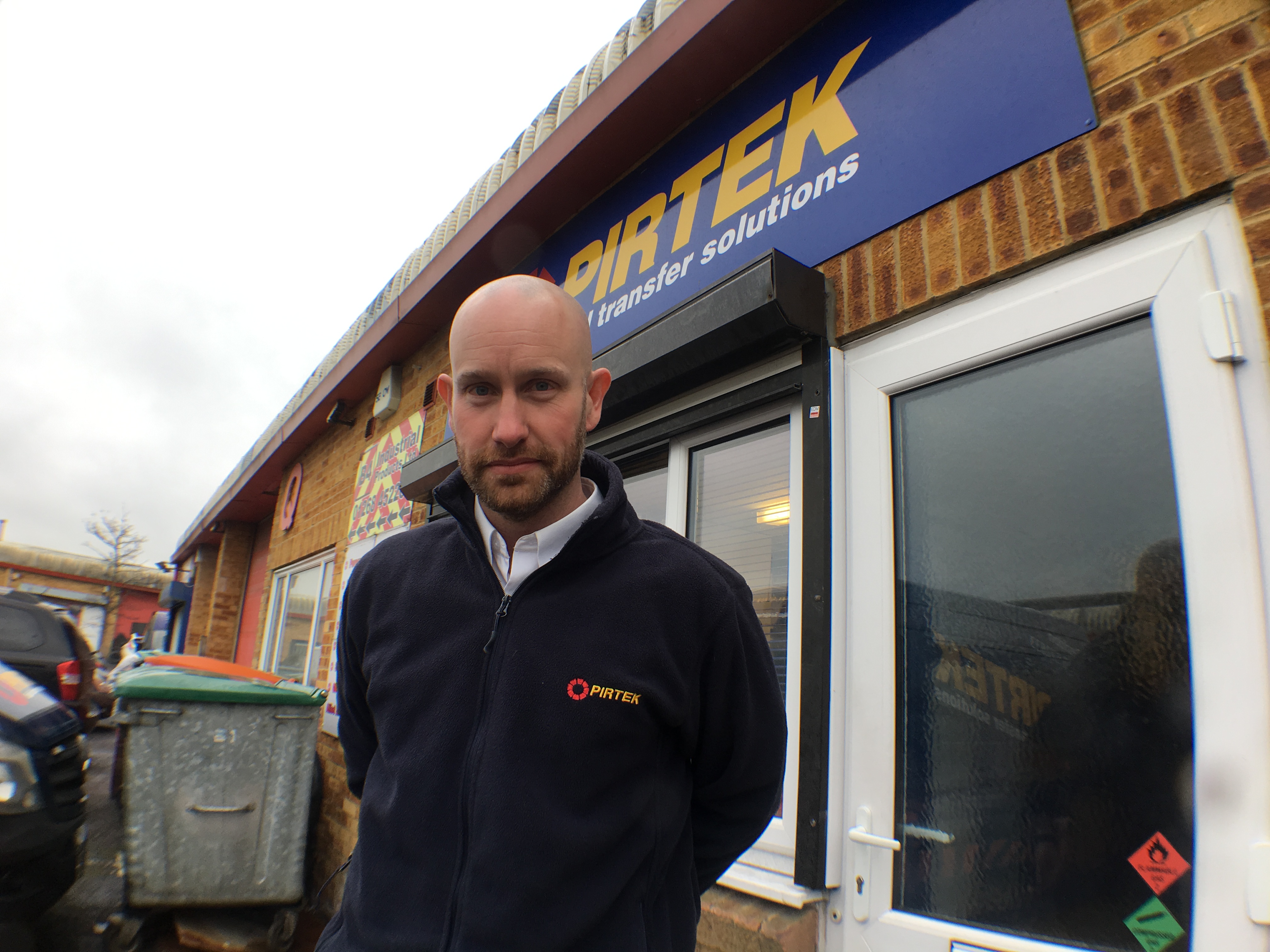 Through a mix of hard graft, dedication and commitment, Colin May has risen through the Pirtek ranks from trade counter assistant to owner, much to his own surprise.

“I never set out to own my own business.   But Pirtek gave me that opportunity and I seized the chance.”   So says Colin May, Licensee at Pirtek Basildon who left school “without direction” and who had never even heard of Pirtek before the day he set foot in what would ultimately become his own business premises some 22 years ago.

May recalls that he was working for a Basildon-based company with links to the hydraulic hose world when he first encountered Pirtek.   “A customer mentioned the fact that Pirtek was opening a Centre nearby,” he says.   “I didn’t know the name but I decided to check them out for myself.”   In a move that would make Norman Tebbit immensely proud, a 19-year old Colin May literally got on his bike after work and rode to the location of the as-yet-unopened Pirtek Basildon Centre.   “They were still setting up.   The electricians were fitting the lights and hoses and fittings were still being labelled and stored,” he says.   “I poked my head in and spoke to the then owner – Vic Lane – and offered him my services as a trade counter assistant.   He called me the same night to offer me a job and I started work there a week or so later.   I haven’t looked back since.”

It was not long before Colin May’s self-taught work ethic started to shine through.

“Even when I was labouring, I wanted to be the fastest or the best,” he says.   “I was never interested in competing with others.   I have always just wanted to be the best at whatever I do, purely for my own satisfaction.”

Vic Lane spotted the potential in his still young protégé very early on and quickly promoted him to Mobile Sales and Service Technician (MSST), handing him the keys to the third van to join the growing Pirtek Basildon operation.

“MSSTs are the public face of Pirtek. Along with the vans, they are the most recognisable element of the business.   And that brings with it a great deal of responsibility,” May insists.
“I must admit, I struggled as an MSST to begin with.   It was a steep learning curve but with some additional training and the help of Vic and the rest of the team, I started to enjoy it.”
But May’s journey up the Pirtek ladder was far from over.   “In addition to Pirtek Basildon, Vic also owned two other Pirtek Centres (Pirtek Harlow and Pirtek Leytonstone) and he was splitting his time between the three.   He made it clear that he was looking for a Centre Manager to help carry some of the workload at Pirtek Basildon and I wasn’t going to say no,” May continues.   “I became one of the youngest Centre Managers in the whole Pirtek UK network.”

In 2003, Vic Lane sold his Pirtek Harlow business to his Centre Manager Perry Tubb.   Yet even though the sale of Pirtek Harlow provided undeniable proof that a Centre Manager could (and, perhaps, should) be an ideal Licensee, the penny still did not drop with Colin May.   “We had all seen how Perry had stepped up from Centre Manager to become the owner of Pirtek Harlow,” May says.   “But it wasn’t until Vic told me he was thinking about selling Pirtek Basildon that I even considered making a bid for it myself.”

With the encouragement of Vic Lane and the support of Pirtek UK and an understanding bank manager, that is precisely what happened.   And 22 years after he first walked through the doors at Pirtek Basildon to push a broom, he was walking through the same doors to push the business forward.

May readily admits that his experience as a depot assistant, MSST and Centre Manager has greatly influenced his approach as a Licensee.   “I would not ask any of my team to do anything that I could not or would not do myself,” he says.   “And, if the need arises, I am still willing take one of the vans and carry out an on-site hose replacement myself. 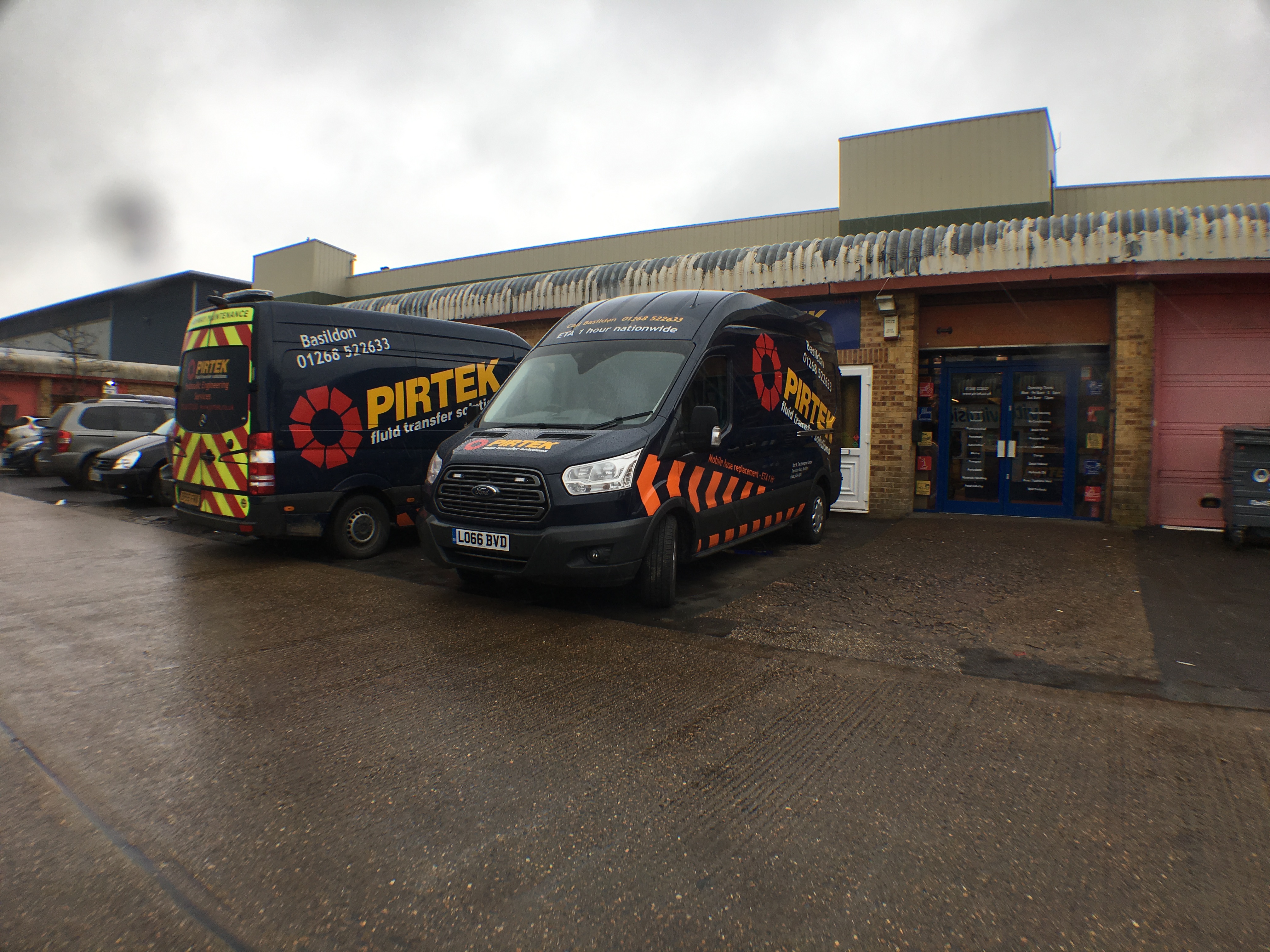 I don’t do it every day but I still enjoy it.”
May’s ability to lead by example forms the foundation of Pirtek Basildon’s success.   Several members of his team have been at Pirtek Basildon almost as long as he has while another left to try his hand at another business only to return to the fold.   And in a case of history repeating, May has also taken on a young and relatively inexperienced trade counter assistant who might one day follow in his footsteps to the very top of the Pirtek career ladder.
“Franchising and the Pirtek business model is not for everyone,” he asserts.   “But it has provided me with a unique opportunity to own my own business and has helped me every step of the way.”

That help comes in various forms, and Colin May cites two specific aspects that have helped his Centre better meet the needs of his customers.   “The training regime at Pirtek is second to none.   All of our staff are trained to the highest possible standards and that training is ongoing,” he explains.   “In addition, Pirtek UK’s National Training & Health & Safety Manager Martyn Smart has developed a series of highly detailed ‘black boxes’ of information.   No matter what industry or application our MSSTs find themselves working in, they are armed with all the health and safety information they will need to ensure their own safety, the safety of the customer and the safety of those around them.”

Pirtek Basildon was also one of the pioneers of Pirtek’s recently-introduced Customer Relationship Management software system.   And Colin May is already a believer and a vocal advocate.   “I liken running this business to filling with water a bucket with a hole in the bottom.   You need to be constantly topping up the bucket to replace those that – for one reason or another – have fallen out of the bottom.   The Pirtek CRM system allows us to do just that,” he insists.   “One of the key challenges of running a service-focused business is that you don’t always hear about a dissatisfied customer.   They just move on and you never hear from them again.   Using the Pirtek CRM system, we can follow up all our customers, make sure that we’re speaking to the right people at the right time, and reinforce relationships at all levels within that customer.”

In his 22 years with the Pirtek business, Colin May has seen many changes.   The two-way radios used to keep the Centre in touch with MSSTs have long since been replaced by mobile phones.   More recently, the company has developed a highly sophisticated app that allows customers to contact the Centre directly at the press of a button on a mobile device.   He has also seen Pirtek grow from a company that was best known purely among its customers to a brand that enjoys a huge exposure thanks to its sponsorship of a British Touring Car Championship team.
One thing that hasn’t changed, however, is his work ethic and his belief in the Pirtek brand.   “When a customer calls us, I want them to receive high-end, top-notch, reliable, professional, trained and safe service,” he asserts.   “That’s what the Pirtek brand means to me and that’s what our customers expect.”

Colin May is too modest to admit it but his drive and enthusiasm – evident when he was a 19-year old trade counter assistant – has helped establish him as another Pirtek success story.   “I am a big part of a small business that’s a small part of a much bigger business, and that’s a nice place to be.   I run a small business in Basildon but my company name is splashed all over a touring car that gets mass exposure on ITV,” he concludes.   “I see nothing but positives from being a part of a franchise.   Pirtek has been good to me.”


If you would like to find out more about the Pirtek Franchise Opportunity, please call 01323 700 414 or simply fill out the enquiry form below.

Award-Winning Property Franchise HomeXperts to give away a FREE franchise!
»