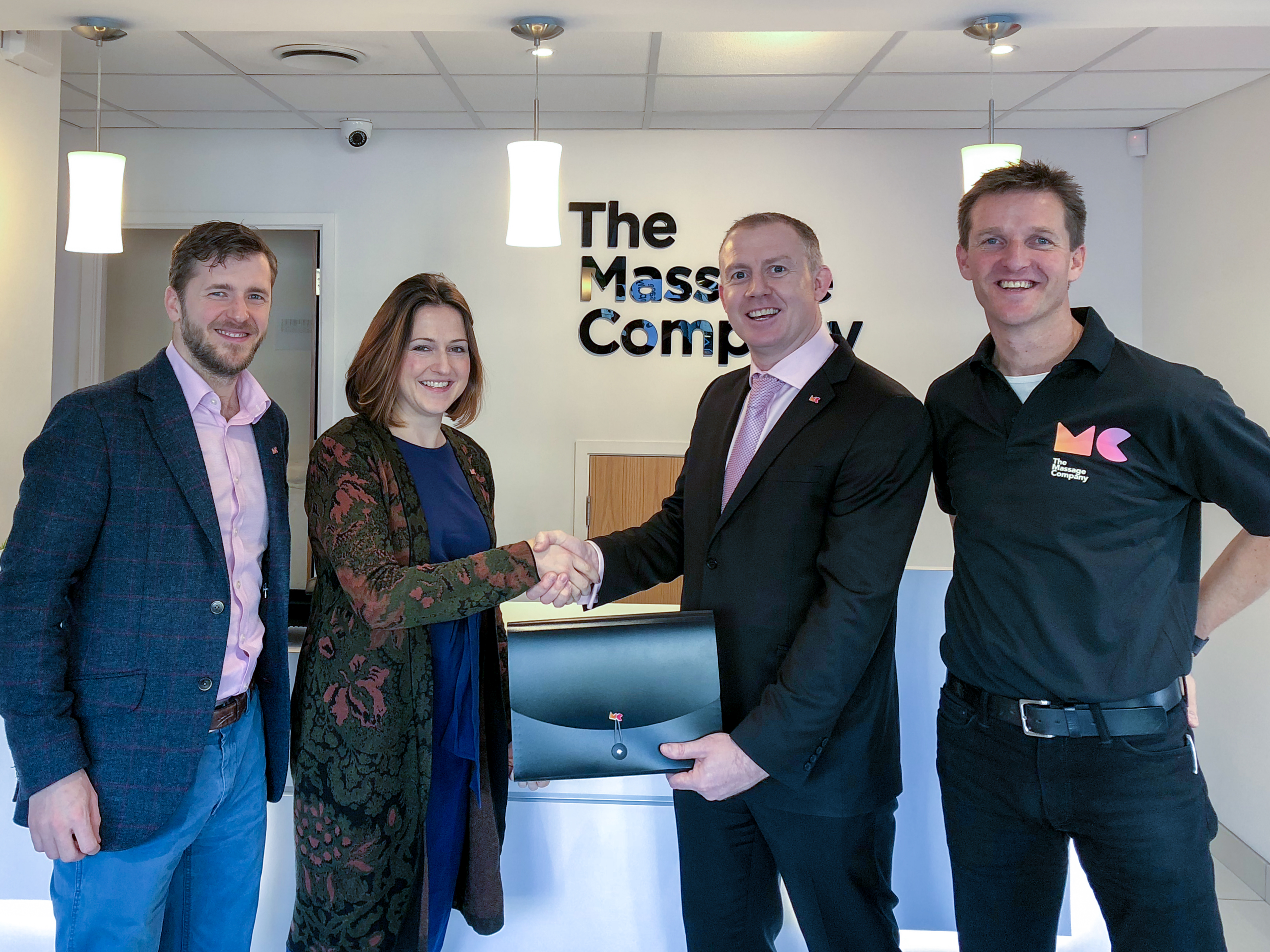 Mark and Rachel Coldham never really set out to become franchisees.  Instead, for this pair it was a bit of a lucky series of events that brought them on the path to becoming the second franchisee for The Massage Company.  A massage franchise opportunity with The Message Company was too good to miss.

Rachel and Mark both started out on a very different career path – having met at the Royal Military Academy Sandhurst in 2005, before joining the Royal Artillery in 2006.  Both enjoyed military life for a few years before eventually leaving the Army to pursue careers in programme management and consulting.  Mark’s focus was largely managing major infrastructure projects and programmes – the London Olympic Games in 2012, Heathrow Airport’s Terminal 2 and a programme with the Home Office; for Rachel it was programmes in the Financial Services sector, mostly geared around digital transformation.

In 2015 the pair – now finally a couple – began talking about the future and concluded that neither had yet settled on their ‘forever jobs’.  As much as they both enjoyed the work they were doing, they wanted a project they could call their own – something they could put their energy, their skills and their hearts into and really nurture.  They also wanted something that would afford a slightly better work-life balance; Rachel already had a son (now eight) and they knew there was a plan to extend their family eventually.  They wanted a venture that would allow at least one of them to step back from the daily London commute!

For months (if not years) they discussed one business idea after another; nothing seemed to really excite them.  The one thing they both agreed was that there was no way they were going to take the plunge until they found something they could be passionate about and really believed in.

Given that there was no immediate rush to find a business plan, life carried on much as normal until in mid-2017 Mark stumbled, quite by chance, on an advertisement for The Massage Company franchise on a major national jobsite advertising a massage franchise opportunity.  The ad piqued his interest because the wellness industry was one that he and Rachel already had a shared interest in.  Both had enthusiasm for healthy living (keen runners and fairly healthy eaters!), and both had suffered sporting injuries in the past, meaning they’d both experienced how much difference good-quality massages can make.

Mark picked up the phone and made the first call, half expecting that to be the start and the end of the conversation.  However, a ‘short call’ turned into some thirty minutes or more and Mark came away from it buzzing; he rang Rachel at work and they decided to take the next step.

The first serious engagement the couple had with Elliot and Charlie (founders of The Massage Company) was at the National Franchise Exhibition in Birmingham in the autumn of 2017, when they had their first chance to meet the team and most importantly, to look at the franchise in the context of other comparable businesses.  Given that franchising as a business model was something that had never occurred to either of them before this point, the show was a really important step.  It also gave them a chance to see the branding and the ‘product’ in action (some of the staff from the Camberley branch were giving massage demos!), as well as to talk to the first franchisee about his own journey.

Meeting the first franchisee was a significant advantage – it was clear that there were similarities in their circumstances and aspirations, and it was reassuring to be able to discuss their thought processes openly and frankly.

Rachel and Mark left the exhibition feeling more convinced that a massage franchise opportunity this was a genuine option for them, and decided to confirm their decision with a ‘discovery day’ at the Camberley site.

If there was anything that was concerning them both at this stage it was a niggling worry that by buying into a franchise opportunity, they were forgoing their opportunity to carve their own path.  They had both been keen to grow and nurture a business of their own, and worried that this model would prevent that.  However, they also understood the advantages it would bring: expertise, industry knowledge, planning and a solid business case… all things that they would have been building from scratch if they were to set something up on their own.

In the end, the discovery day sealed the deal for them. It was clear that that the business was absolutely at the right point to make a success in the market, and that it ticked the ‘boxes’ they needed. Mark and Rachel signed on the dotted line and became the second franchisees in December 2017.

2018 has started with concentration on identifying the right property for their business, which is going to be key to its success.  Meanwhile they are also starting the process of learning about the operational side of the business, such that they’re ready for an opening in the second half of the year.

A new generation driving the success of multi-unit franchising
»