Franchise UK > Franchise UK Blog > Catering > In the face of adversity Wok&Go continues to expand its brand across the UK
2
November 2, 2020Catering 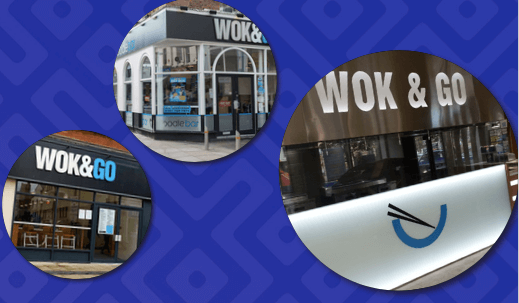 Despite the difficult period ahead for the restaurant and hospitality industries, Asian noodle bar concept Wok&Go is expanding its brand with 100 stores set to be open in the next 5 years.

Pheby Food Concepts Group Ltd. founder and owner Des Pheby says that though this isn’t the ideal time for anyone in the hospitality industry he is confident his brand has what it takes to expand, and increase it’s reach over the next few years.

The benchmark of the Pheby Food Concepts Group portfolio, Wok&Go first opened its doors in Chester in 2008, since then the brand is now in more than 10 UK locations with over 15 sites between them and even branches in Portugal and Bahrain. The brands dedication to creating an authentic Asian dining experience at a fraction of the time has seen its aggressive expansion and makes the concept the perfect style of restaurant to continuously grow.

“Despite very trying times we have shown the robustness of this brand and popularity that we not only surviving but accelerating our growth,” said Mr Pheby, who continued to say “We are very pleased to be working with our new franchisees and excited by the significant growth that these partnerships will represent in cementing Wok&Go as the UK leading noodle bar franchise”.

The latest expansion for Wok&Go comes down south. The restaurant has several sites in the north of the UK but is quickly adding more and more southern stores to their portfolio. With 2 new master franchisees signed up to the brand, Wok&Go will soon be accessible to a much larger portion of UK residents.

The new signing will cover the Essex/Kent and Oxfordshire areas of the UK, alongside another northern site in Ormskirk. These sites will add another 50 stores to the Wok&Go catalogue over the next 5 years. Adding these sites to the recently signed 39 stores in London 15 overseas sites, Wok&Go will have over 100 stores globally within the next 5 years.

The brand isn’t finished there though and has plans to announce more franchisees officially signing up over the coming weeks. Wok&Go is the fastest growing noodle bar concept in the UK and is always open to new franchisees getting involved with the brand.

To learn more about a franchise with Wok&Go food franchise, view the Wok&Go profile.