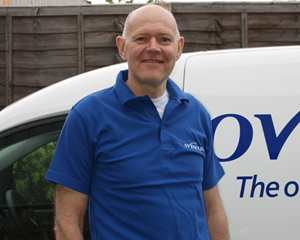 Both Steven Sykes and Estelle Robertson had very successful careers, but they decided that they wanted a better work life balance – something that they could achieve through an Ovenclean franchise.

Although they have faced some challenges, 18 months down the line Steven and Estelle are thoroughly enjoying the benefits of owning their own business and are seeing huge demand for their service.

Steven and Estelle chose a franchise due to risk limitation. “Ovenclean offered a proven business model, a way of operating that showed us evidence of a successful track record. We wanted a regular income but without the constrictions, demands and stresses of corporate life.”

“The initial support consisted of 2 weeks intensive ‘on-the-job’ training which was supervised by another franchise owner. There was much much more involved in the process of cleaning an oven than one would have imagined! However, ongoing support was received from Ovenclean HQ on request – the team are truly knowledgeable, extremely helpful and only ever a phone call away.”

Like most business owners, Steven and Estelle experienced some challenges along their journey to success, but with hard work and determination they’ve made their business more successful than ever before!

“We experienced a period of drought as any business does. It was a very sobering and new experience for us – our business has previously been pretty busy, with a constant roll of calls, e-mails and cleans.

“Through hard work and support from Head Office, we most certainly turned it around! We had the best ever trading period since the business began largely due to prospecting for new business. We completed 40-60 oven cleans over 2 weeks and have already been assured of getting the contract next year.”

So, Steven and Estelle’s business dip turned into a business peak. They have most definitely achieved their business goals, so we asked them where would you like to go from here? What are your plans for the future?

“In time, we would definitely like to grow our business and recruit others to work with us. Our ambition is to be able to fill several diaries with cleans.”

We also asked Steven and Estelle if they would do it all again, and they said “In a heartbeat! Owning a franchise has given us the ability to control our own destiny. If you follow the proven model that is laid out by Ovenclean, you will succeed.”

“It’s not an easy option, but it’s one of the most rewarding and satisfying things we have ever done. The business is there and the opportunity is waiting if you are prepared to be dedicated and work hard.”

If you would like to find out more about a franchise with Ovenclean, please click here -> Ovenclean Franchise

Beautiful Times Ahead With Dwyer Group
»