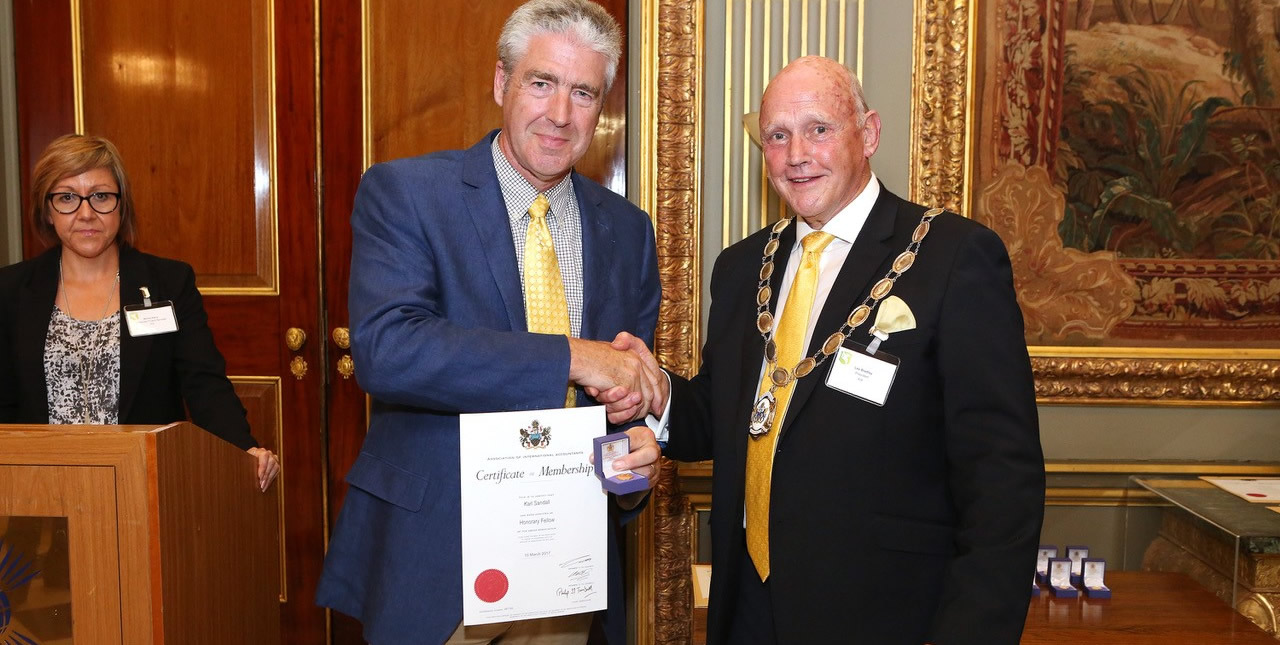 Karl Sandall, Group Chief Executive Director of TaxAssist Accountants, has been awarded honorary membership of the Association of International Accountants (AIA) in recognition of his contribution to accountancy and finance. The award ceremony took place at Marlborough House, Pall Mall, London on 26 July 2017.

The AIA is a global body for professional accountants, founded in 1928 to promote the concept of ‘international accounting’ in order to create a global network of accountants committed to the interests of its members and the accountancy profession.

Philip Turnbull, CEO of the AIA, said: “Honorary membership is an elected category of membership and is awarded to a person who the Council considers has contributed service of particular merit to the Association or the profession of accountancy. Karl has been awarded this honour because of his contribution to the field of accountancy and finance.”

Karl spent 26 years at a senior level with a major clearing bank before joining TaxAssist Accountants in 2000 as Operations Director, and became Group Chief Executive Director in 2002.

“It is a great honour to be recognised in this way,” said a delighted Karl. “I am immensely proud of what we have achieved as a business since incorporation with a blank piece of paper in 1995, to the UK’s largest network of over 200 small business specialist accountants today.

“We expanded to Ireland in 2009 and Australia in 2015 with further development planned for the USA, New Zealand and Canada, where we also see a need for our brand of ‘retailed’ professional accountancy services.”

Karl is a ‘fellow’ of the Chartered Institute of Bankers and a member of the Financial Industry Group and of the Committee of the IFS School of Finance for the East of England.

He is also recognised by the British Franchise Association as a QFP (Qualified Franchise Professional) and is a trustee of its charitable trust helping disadvantaged individuals benefit from franchising.

If you would like to find out more about the Tax Assist franchise opportunity, please fill out the enquiry form below and we’ll be in touch.

For The Cat Food Experience
»