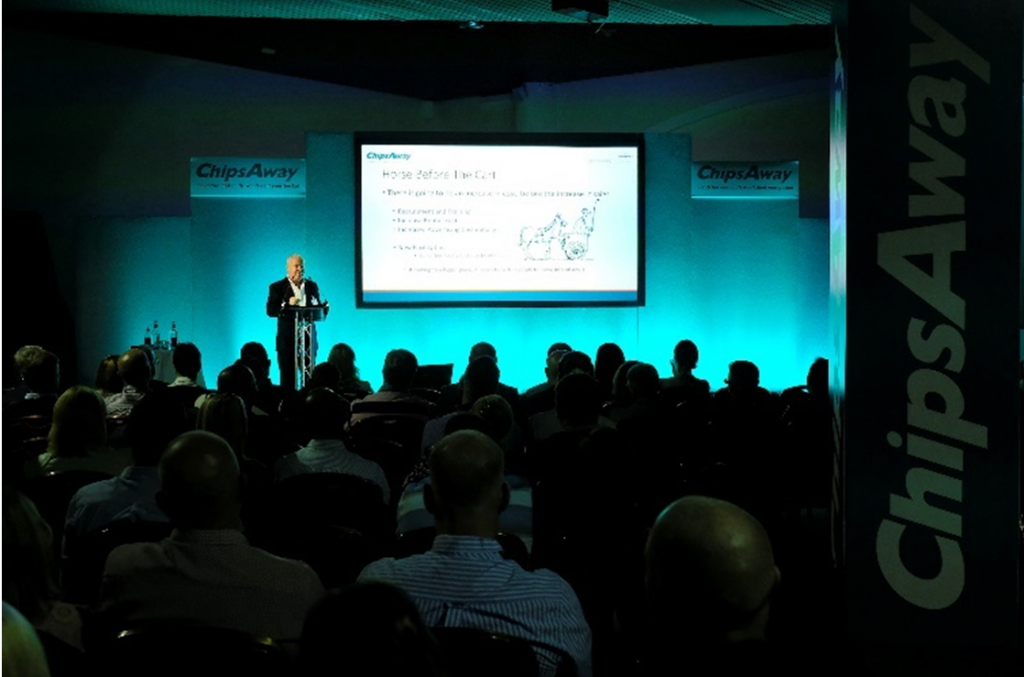 Over 200 delegates congregated at 5* resort – The Celtic Manor, for ChipsAway’s annual conference and awards dinner over the weekend, celebrating 23 years as the UK’s leading minor car body paintwork repair brand.

ChipsAway CEO, Tim Harris, kicked off the event – addressing the crowd and highlighting the Franchisor’s key areas for growth and development going forward. This was followed by a marketing update from Marketing Director Robin Auld, alongside Marketing Manager Ella Pugh – who each shared the huge successes of last year’s marketing activity, as well as 2017’s overall campaign so far! Three franchisees also took to the stage to share their journeys so far, which was a hugely valued addition to the line-up and one the rest of the franchise network thoroughly enjoyed.

This was followed by a vendor show, in which key industry suppliers exhibited their wares throughout the afternoon! There were demos of new and upcoming products, as well as a competition to see who could sand off the most filler in 30 seconds, which really got everyone’s competitive side going! Not to mention a bit of fun had by many at the ChipsAway ‘Raceway’!

The celebrations continued into the evening with a Gala dinner at which top performers from the ChipsAway network were recognised and rewarded for their phenomenal achievements.

The highly coveted award for ‘Franchisee of the Year’ went to Mark Burns, who only joined the network 18 months ago! Since joining he has worked exceptionally hard to grow his business and now manages a Car Care centre, two territories and multiple employees and vans.

“Mark is an extremely valued member of the ChipsAway network and very worthy winner of this title,” comments Tim Harris. “He embodies the key values of the ChipsAway brand by delivering exceptional quality repairs, outstanding customer service and ultimately managing a fantastic local business.”

Not only did Mark win ‘Franchisee of the Year’, but he was also presented with the ‘Customer Service’ award, for his efforts in helping ChipsAway achieve their fantastic 5-star Trust Pilot rating, having received the highest number of customer testimonials over the past year!

Other high achievers included ‘Newcomer of the Year’ Jim and Caroline Clennell, who have achieved fantastic results within their first-year of trading, and ‘Marketeer of the Year’ went to Rob Slade and Jane Freeman, who are always willing to try out new marketing initiatives and are hugely proactive in getting their name out to customers within their territory! Last, but by no means least, the ‘Unsung Hero’ award, as voted for by the franchisees themselves, went to Rob Marshall, for his outstanding contribution and always going above and beyond to help out his fellow members of the network.

To complete the evening, a raffle raising a record £2,500 for charity was held and guests danced the night away!

“We had a fantastic day – and not just because we won!” comments ChipsAway double award winner Mark Burns. “The effort and work which goes into the annual event is clear for all to see and the whole team gets so much out of attending. It was very unexpected and a huge honour to be awarded ‘Franchisee of the Year’, not to mention the ‘Customer Service’ award, and we’re looking forward to putting our ambitious plans for the future into action with the help and support of the great team at Head Office!”

To find out more about the ChipsAway Franchise Opportunity, Click Here or fill out the enquiry form below and a member of our team will be in touch

Home Instead franchisee marches to success with Resettlement Award shortlisting
»